Short History of the Munros

The origins of Clan Munro are lost in the distant past. By tradition, C11th mercenary soldiers from Ireland, they were granted Lands in Ross by a grateful King after assisting him in defeating the Viking invaders of this part of Scotland.

From documentary evidence, they were well established by the middle of the C14th on the north shore of the Cromarty Firth in the area known as Ferindonald (Donald's land) after their legendary first chief. From this narrow base comprising the modern parishes of Kiltearn and Alness they gradually spread their sphere of influence northwards and eastwards into the fertile plain of Easter Ross.

Initially, they held land as vassals of the powerful Earls of Ross but on the forfeiture of that earldom, directly from the Crown. In general a law abiding and peaceful clan, nevertheless when needs arose they stoutly defended their interests against more powerful neighbours.

Loyal to the Crown, early in the reformation the Chief and his followers adopted the Protestant faith, a move which greatly influenced future clan policy. Under their Chief they fought on the continent in the 30 Years War and supported the Protestant succession to the British Crown against the Catholic Stuarts during the Jacobite Risings of the C18th.

The Munros military record continued into the present century, providing the British Government with some of its finest fighting troops through the Highland Regiments. Clansmen and women have excelled in many professions including medicine and politics. Military expeditions, adventurism and social change in the Highlands saw the name Munro spread throughout the world. The power of the old Highland Chieftains has gone but the spirit of the Clan lives on through the Clan Munro (Association) which enjoys a world-wide membership. 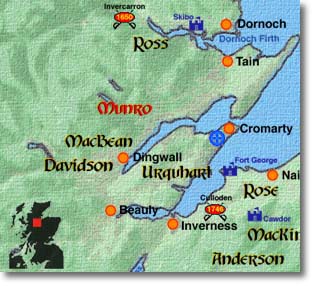