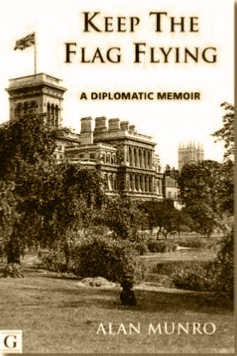 The insightful and entertaining account of a lively British diplomatic career in the post-colonial period.

Keep the Flag Flying is intended to convey something of the flavour — and the frivolities — of escapades and encounters which Sir Alan and his wife experienced in the course of thirty-five years in diplomacy in the Middle East, Africa and South America, and at home too. The narrative ranges from the 1991 Gulf War, the Iranian Revolution and the running sore of Palestine through a gallery of African despots and of royal moments to the furore over the arrival of Ronald Biggs in Brazil. All this is set against a half-century of post-imperial adjustment in Britain's foreign policy, in which withdrawal from a global role is offset by an overriding concern, shared with western partners, to counter the extension — political and economic as well as military — of Soviet Marxist influence across a fractious world. The account brings out the human side, as well as the value, of a profession in which "life's rich tapestry" plays an uncommonly prominent part.

"Keep The Flag flying is a compulsive read indeed - with added humour, drama and deft political judgment — including Cold War spies and the Gulf War of 1991. "

"Keep the Flag Flying joins the elite band of Foreign Office memoirs that illuminate the world while making you laugh out loud... a thoroughly engaging account of a career ... that is packed with wisdom and humanity, along with its share of folly... "

Sir Alan Munro joined the British Diplomatic Service in 1958. For the major part of his diplomatic career he was involved with the Middle East and North Africa. Having studied Arabic in Lebanon, he served in Beirut, Kuwait, Benghazi and Tripoli during the 1960's. He was head of the Arabian Department during the Iranian Revolution of 1979, and then looked after military cooperation with Arab states in the Ministry of Defence. He went to Algeria as ambassador in 1984 and was subsequently Under-Secretary of State for the Middle East and Africa in the Foreign Office. He was British ambassador in Saudi Arabia from f 989 to 1993, a period which coincided with the Gulf War.

Since leaving the Diplomatic Service he has kept up close connections with the Arab, African and Islamic worlds. He writes and broadcasts on Middle East issues and is the author of a book, Arab Storm, on the politics and diplomacy behind the 1990-91 Gulf War.