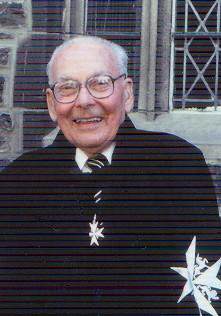 During 1974, with the approval of the late Chief, Captain Patrick Munro of Foulis, Bud and Rita organized Clan Munro Association of Canada.

Bud was raised in Halifax, Nova Scotia. He attended St. Francis Xavier University with dreams of entering into Medical School. Following one year of study, Bud entered into the Nova Scotia Police Department on 16 May 1930. He continued his career with them until 31 May 1932 and then joined the Royal Canadian Mounted Police.  Bud retired at the rank of Corporal in April 1957. At the completion of Bud's law enforcement career, he went to work for the Industrial Accident Prevention Association until he finally decided to retire.

Bud's life story began 95 years ago. His accomplishments were both significant and many and his life reads like a best selling novel with each page marking a new adventure.  When we remember Bud, we can take our minds to a time when the Canadian North was patrolled by Mounties with dog teams and we can remember the true grit and tenacity of spirit that were owned by people like Bud. He was a man who lived his life with conviction and a real sense of what was right and proper.

Starting at a young age, Bud began his service to people as a Boy Scout in 1924.  Bud became increasingly interested in first aid and around 1937, while working with the RCMP, he became a first aid instructor with St. John's Ambulance.  During war time, Bud organized Volunteered Aid detachments to travel overseas. Through his many years and dedicated service, Bud was elevated to the highest order of St. John's: Commander in the order of St. John's.

While a member of the RCMP, one of Bud's many responsibilities was to teach proper decorum and etiquette to new officers.  This etiquette was showcased during a regimental dinner for King George of England that was arranged by Bud.  This tradition is carried on to this day.  Bud remained a loyal member of the RCMP Veterans Association.

In 1998, Bud was privileged to achieve his Fourth Degree Investiture with the Knights of Columbus in Stirling, ON.

Bud married Rita Suni, following a courtship that swept both of them off their feet and kept them flying high.  Bud and Rita were both working towards their pilot's license when they fell in love.  Neither of them completed flying school as a result of their whirlwind romance.  Although Bud and Rita did not have any children of their own, they did touch the lives of many children.  Bud and Rita set up an annual scholarship program for St. Theresa's Catholic School to assist students in achieving higher education.

Although this chapter of Bud's remarkable life has been closed, we can all take comfort in his belief in Jesus Christ and eternal life in Heaven.  If living your life in the service of others truly means a closeness to God, then Bud's spirit is beginning the greatest of adventures.

This tribute to Bud is from his funeral service.