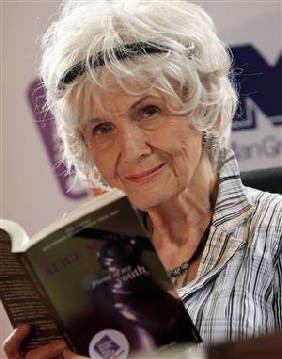 A writer of short stories, revered as a thorough but forgiving chronicler of the human spirit, has won the Nobel Prize in literature.

Seen as a modern equiv­alent of the 19 th-century Russian master Anton Chekhov for her warmth, insight and compassion, she has captured a wide range of lives and person­alities without passing judgment on her charac­ters.

"I knew I was in the run­ning, but I never thought I would win," Munro said when contacted in Victoria British Columbia.

It is likely to mark the fi­nal chapter in her career. She said in June she was "probably not going to write any more".

Peter Englund, of the Swedish Academy which made the award, said: "She has taken an art form, the short story, which has tended to come a little bit in the shadow behind the novel, and has cultivated it almost to perfection."

Munro is the 13th female literature laureate in the 112-year history of the No­bel Prizes.

Her work often turns on the difference between her youth in Wingham, a con­servative Canadian town west of Toronto, and her life after the social revolution of the 1960.